A record-breaking summer for the residential real estate market continued in August, according to new monthly data on for-sale housing inventory and demand on Realtor.com®. Homes for sale on the site in August are moving two percent more quickly than last year as prices continue to reach new record highs.

“Summer 2017 was one of most competitive buying seasons that we have ever witnessed, fueled by historically low mortgage rates and inventory shortages that resulted in record-high prices, said Jonathan Smoke, chief economist for Realtor.com. “With the school year starting now in most of the country, we’re seeing some drop-off in demand, which may provide some relief for buyers weary from battling it out against other buyers all summer.”

The median age of for-sale listings on Realtor.com in August is expected to be 72 days, which indicates properties are selling two days faster than this time last year but four days slower than last month. In August most markets begin to slow down in response to the start of the school year, with inventory levels and market velocity moving away from peaks and sales beginning to decline.

The median home was listed for $250,000, eight percent higher than one year ago and virtually the same as last month. That extends this summer’s trend of record high prices and is a new peak for August.

For-sale housing inventory reached its apex last month and August now reflects the usual seasonal shift with the first monthly decline since January. Even with an estimated 475,000 new listings coming onto the market in August, the total inventory remains considerably lower than one year ago.

The median age of inventory in August is expected to be 72 days, down three percent from last year and up six percent from last month. The median listing price for August should reach a record high of $250,000, an eight percent increase year-over-year and flat compared to July.

The listing inventory in August should show a one percent decrease from July. Additionally, inventory should still show a decrease of eight percent year-over-year. 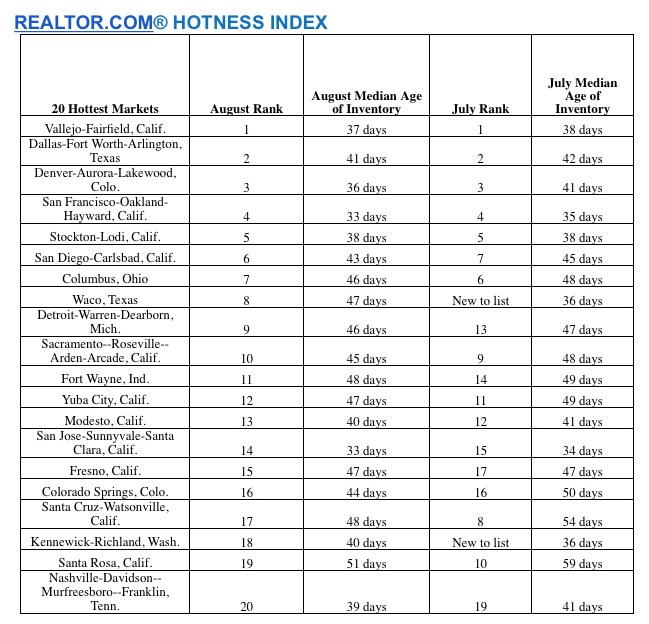